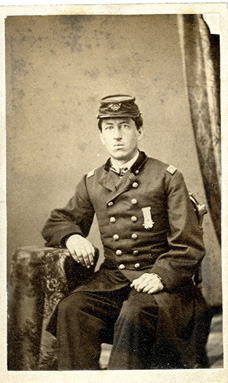 Written Out of History: Major John Nevin of the 93rd Pennsylvania Infantry

Join Western Pennsylvania native and Civil War Times magazine editor Dana B. Shoaf as he tells the story of Sewickley native John J. Nevin during the Civil War. Nevin served in three different units, most notably with the 93rd Pennsylvania, which he led on an important, but overlooked attack during the Battle of Gettysburg. Despite Nevin’s solid service with the 93rd, he was virtually ignored by the veterans of the regiment during the postwar years.

Shoaf interweaves his talk with quotes from Nevin’s diary, held at the Senator John Heinz R
egional History Center. This fascinating discussion reveals overlooked aspects of the Battle of Gettysburg, as well as the complex nature of Civil War veterans and their memories of when their “hearts were touched by fire.”

Light refreshments served. Registration not required. Free and open to the public. 2nd Saturday Lecture Series made possible by the Massey Charitable Trust. Lecture is being held in the Lincoln Gallery.