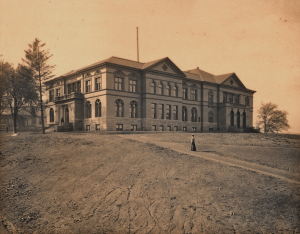 The Andrew Carnegie Free Library & Music Hall (ACFL&MH) has served Carnegie and surrounding communities the “beacon on the hill” since 1901.  The Library & Music Hall was Andrew Carnegie’s legacy gift to the town that incorporated to take his name in 1894. Though he funded 2,500 libraries around the world, the industrialist-turned-philanthropist endowed only five libraries.  The ACFL&MH is proudly one of them.

In 1981, the Andrew Carnegie Free Library & Music Hall was listed on the National Register of Historic Places.

Unfortunately, endowment was not a good model.  In the 1980s, the ACFL&MH had $136 in its checking account after payroll.  Decades of poverty and egregious water damage threatened not only our 35,000 sq. ft building, but the Library & Music Hall itself.

Fortunes turned in late 2003.  The Chartiers Valley Partnership (an organization spearheaded by a Carnegie High School Class of 1951 graduate) launched a capital campaign to restore the ACFL&MH’s facility with a $500,000 challenge grant.  The Challenge: the community had to contribute a dollar for dollar match to secure the grant.  It had to do so without foundation, government or corporate support.  And it had justten months to reach its goal. 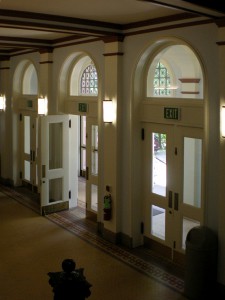 How the community reached that goal has become the stuff of legend.  In a burst of generosity, the community donated $60,000 between the September 17, 2004 flood that ravaged Carnegie and the end of the month deadline.

It is now more than $12 million later!  The building is structurally sound, weatherproof, partially air conditioned and accessible. Interior restoration includes the Music Hall’s lovely and welcoming lobby.  Wonderfully comfortable seats replaced Carnegie Carnegie Hall’s notoriously uncomfortable ones. The meticulous restoration of the Espy Post in 2010 garnered national and international attention. One hundred photographs of the 16th President complement the Post in the adjacent Lincoln Gallery.

The ACFL&MH’s basement gym became the Studio in 2011.  Since then, it has emerged as a venue for art shows, symposia, job fairs, training, poetry readings and intimate performances with a “club vibe.”  The long-awaited restoration of the Library in 2015 has staff asserting, “Close your eyes and picture library.  Chances are you will picture us.”

Library Park will convert the ACFL&MH’s steep grounds from a barrier into inviting green space that connects the Library & Music Hall to Carnegie’s burgeoning Main Street below.  Begun in 2017, Library Park was interrupted by a mudslide in 2018.  However, work completed before the now remediated mudslide already gives the ACFL&MH a fabulous new sense of place. During the 2020 pandemic, the ACFL&MH and its grounds became an oasis of calm, drawing walkers, dog walkers, bikers, picnickers and photographers.

Upgrades to programming have kept pace with facility improvements.  The ACFL&MH is very much A Library and So Much More!   Services and programming are creative, eclectic and ever-evolving to meet evolving community needs.

One of the Library & Music Hall’s most impactful moments came in late 2016.  Recognizing the ACFL&MH’s value and responding to an outpouring of community support, Carnegie Borough signed a 20-year contract with the ACFL&MH that gave the Library stable and generous funding for the first time in its history.

The Carnegie Carnegie is once again beautiful, vibrant and beloved.  Our remarkable journey continues….