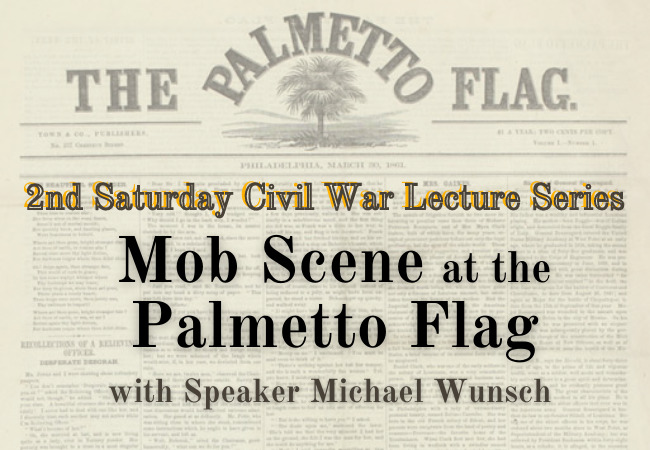 In early 1861 there were many in Philadelphia who supported secession, including one of the city’s newspapers, The Palmetto Flag. Following the attack on Fort Sumter, as patriotism swept across the North, Philadelphia residents galvanized behind the Union. On April 15, 1861 a protest at The Palmetto Flag would devolve into a violent riot. If not for the swift intervention of Philadelphia’s mayor and the city police in putting down the mob, Philadelphia and other northern cities may very well have experienced greater rioting. Join us as Michael Wunsch recounts the story of these events in early Civil War Pennsylvania.

Born in Brooklyn, NY, Michael has been a resident of Philadelphia since 1966, graduated from La Salle College in 1980, and is employed by a Social Services company in Blue Bell, PA. He has been speaking on Civil War topics since 2002, and is a member of the Delaware Valley CWRT, the GAR Civil War Museum & Library, and the Lincoln Forum. He currently serves as Corresponding Secretary for the General Meade Society of Philadelphia.