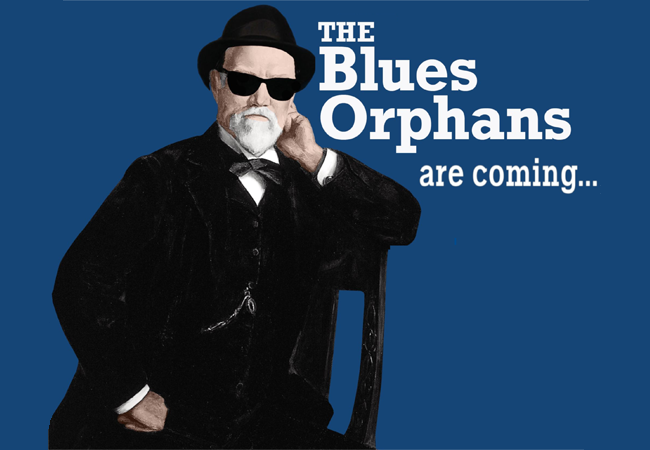 Listen Locally with The Blues Orphans

The Blues Orphans have been performing original genre-bending roots music since 1979. Based in blues and bluegrass with punk-funk hip-hop-polka flavors, they offer a cauldron of hysterical new Americana.

Founded 40 years ago by Carnegie’s own, brothers Andy & Bob Gabig, The Blues Orphans have recorded 6 albums of original songs featuring local themes and topical humor about life in the 21st century.

This concert celebrates their continuing 40 year odyssey and will feature Matthew Kweder on drums, Roger Day on tuba, Dr Nelson Harrison on trombone and Lou Schreiber on clarinet & saxophone.

91.3 WYEP is a media sponsor for the Andrew Carnegie Free Library & Music Hall presenting Listen Locally with the Blues Orphans.

Brothers, Andy and Bob Gabig, apprenticed on the road in the mid 70’s playing in the lively street music scenes in New York, New Orleans, San Francisco, Montreal, Paris,  honky tonks in Nashville and Chicago blues clubs. Mining the traditional roots of blues, jazz, country and bluegrass they push the boundaries and flavor their sound with modern influences, local topics and current events. Their playlist contains over 150 original songs, 80 of which have been recorded on 7 albums. Their formula remains simple, catchy hooks and intelligent lyrics with humorous insight supported by excellent musicianship.

Dr. Nelson Harrison (trombone and trombetto) played in the Count Basie Orchestra in the 70’s and with James Brown, Aretha Franklin, Dionne Warwick, the Temptations and many others.

Schrieber and Harrison are both Pittsburgh Jazz Hall of Famers and 60 year veterans of the local jazz scene.

Roger Day (tuba) is one of the busiest men in the local music scene, performing with several bands and playing everything from Latin to Klezmer. He is a classically trained musician and brings a unique style of soloing to any song.

Matthew Kweder (drums) fronts his own band, Smoking Section, and has been teaching percussion for more than 40 years in Pittsburgh. He also plays solo piano shows around town.