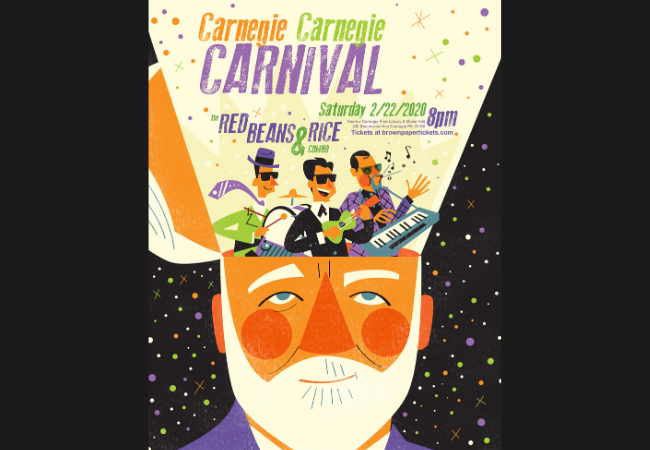 The Red Beans & Rice Combo returns to the Studio with New Orleans and Mardi Gras tunes to celebrate the last weekend of Carnival Season in style.

The Red Beans & Rice Combo are serious musicians who don’t take themselves too seriously. The fun-loving trio is known for their danceable mix of New Orleans R&B, early rock & roll nuggets, and barroom ballads, with a jazzy dash of Tin Pan Alley, and a side of wit and humor.

Complimentary snacks, drinks by donation and a prize for the “best dressed!”

Tom Roberts (piano, vocals, whistling) is one of the world’s leading exponents of early jazz piano. He’s performed on The Tonight Show, and was the featured pianist at the International Stride Piano Summit in Zurich, Switzerland, 2001 and 2009. Tom was the pianist for Vince Giordano and the Nighthawks in New York City and served as pianist and musical director for Leon Redbone for six years.

Dave Klug (drums, percussion) has had a successful illustration career for more than 30 years. His drawings have captured the eye and imagination of clients such as The Wall Street Journal, The New York Times and Scholastic. He created larger than life murals for The Pittsburgh Zoo and Aquarium, The Consol Energy Center, and the world-famous Primanti Brothers Restaurants. Dave is also a household name when it comes to music, drumming for some of the Pittsburgh area’s best bands since the 1980s.

Wayno (vocals, harmonica, ukulele) is a Pittsburgh-based cartoonist, illustrator, and musician, and has contributed art to many local recording projects over the years. He was featured as visiting artist, lecturer, and instructor at Manchester Craftsmen’s Guild, and co-owned Public Records, an independent label that was active in the early 1980s. He’s the daily cartoonist for the Bizarro, which is carried by more than 350 newspapers worldwide.