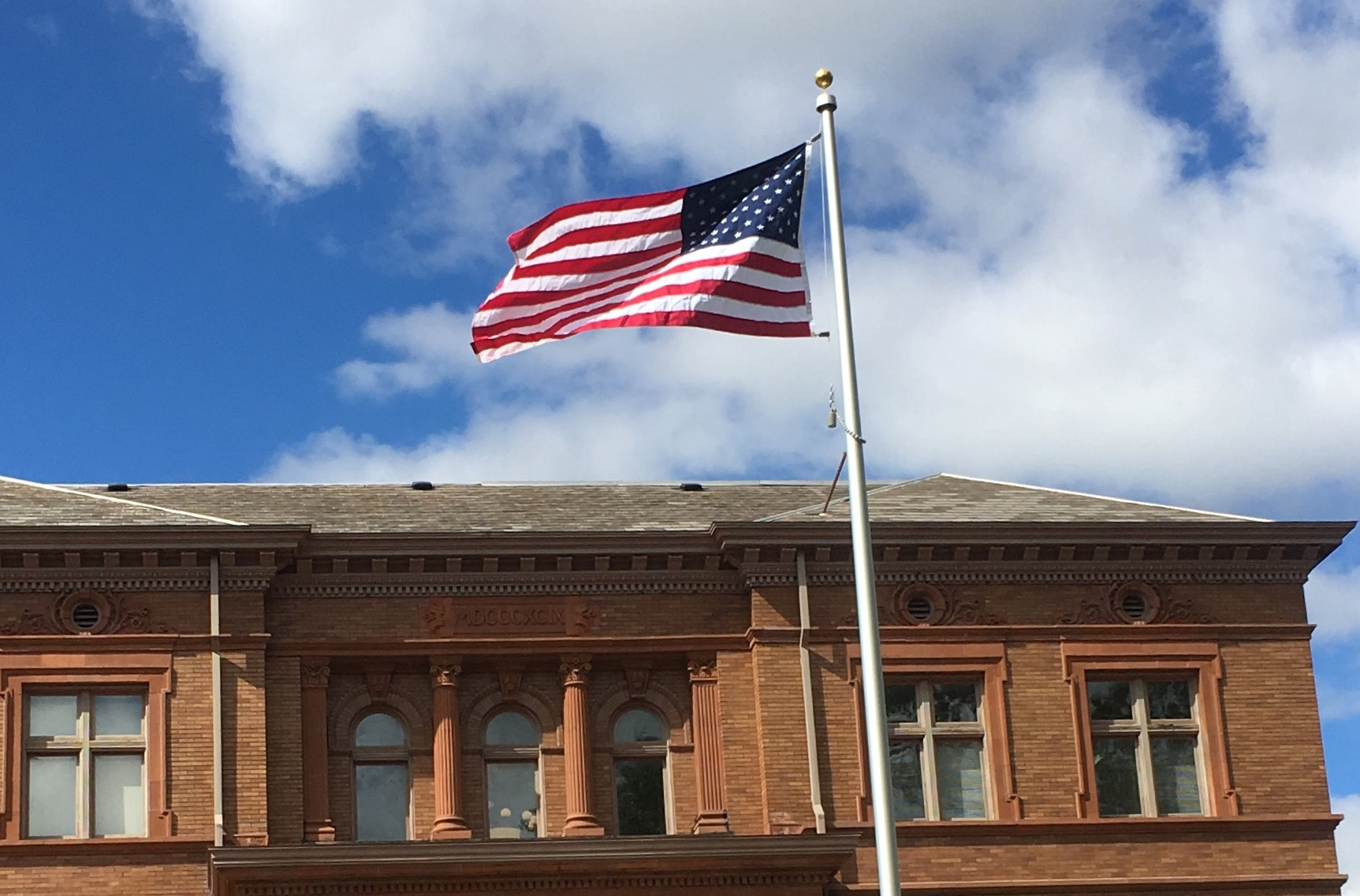 On Veterans Day, Saturday, November 11 at 2:30 p.m., the Andrew Carnegie Free Library & Music Hall  will host a ceremony to dedicate its new flagpole.  Though the flagpole and flag were installed in October as part of Phase I of Library Park, it seemed fitting to hold the ceremony on Veterans Day.

Joe Iacono, President of the American Legion Carnegie Post No. 82, advised the Library & Music Hall on the appropriate protocol for the dedication. Legion members will “Present the Colors” on Veterans Day. The ceremony will take place regardless of the weather.

Richard D’Loss, USMC veteran, Carnegie Councilman and Library & Music Hall Trustee will serve as emcee for the ceremony.  The Very Rev. Robert Popichak will deliver the Invocation, and the 9th Pennsylvania Reserves will fire the single volley the ceremony calls for.  The 9th PA Reserves is the Civil War Living History and Re-Enactment group that has worked closely with the ACFL&MH in their stewardship of its rare Civil War room, the Capt. Thos. Espy Post No.153 of the Grand Army of the Republic.  Carlynton alumnus (Class of 2017) and accomplished trumpeter Tyler Smith will play the National Anthem along with two other young trumpet players, Alex Berhosky and Michael Cosnek.

The ceremony also pays tribute to Korean War veteran Robert M. Gordon. He enlisted as a 2nd lieutenant and was discharged as captain, and asserts that he truly loved being a soldier.  Bob, who donated the new flagpole and flag to the Library & Music Hall, is President of Gordon Terminal Services and resides in Sewickley.  However, his roots are in Carnegie.  His mother’s family was the Pascoes of Pascoe Motor Company and Carnegie National Bank.  In addition to his Army service, Bob served as a long time Scout Master and is an avid reader and Civil War enthusiast – two of his great grandfathers were charter members of the Espy Post.  He also stepped up as Honorary Chair of the Chartiers Valley Partnership’s Campaign to restore the Library & Music Hall.  Bob led by doing; he is the most generous individual donor to the ACFL&MH.  He states simply, “I love my country, I love Carnegie and I love this Library.”

The flag dedication ceremony will be followed by dessert and coffee in the Lincoln Gallery.  The Espy Post will remain open until 4:00 p.m.

Executive Director Maggie Forbes hopes that the Veterans Day ceremony is the first of many civic ceremonies that will take place at the flagpole and in Library Park.

For those who want to start their day early at the ACFL&MH, Tom McMillan (descendant of Thomas Espy and Vice President of Communication for the Pittsburgh Penguins) will be speaking about his new book Gettysburg Rebels at 1:00 p.m.  His talk is part of the Library & Music Hall’s “Second Saturday Civil War Series.”  The ACFL&MH’s Civil War programming is made possible through a grant from the Massey Charitable Trust.