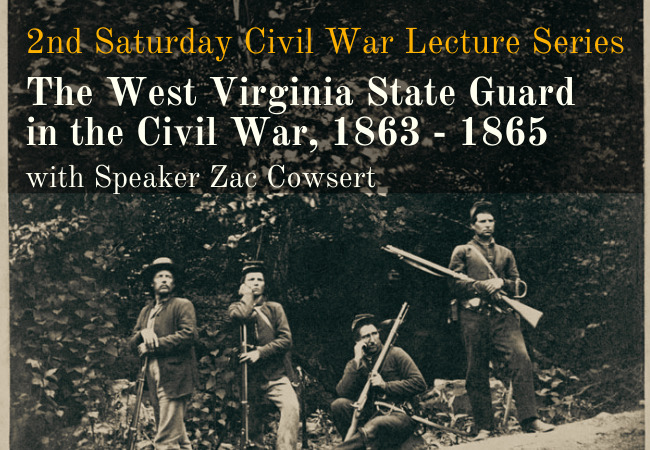 This is an In Person and Online event! This event will be held live and in person in the Music Hall at the Andrew Carnegie Free Library & Music Hall. Come early to tour our national treasure Captain Thomas Espy Post and the Lincoln Gallery. Speak with reenactors and take in a 19th century military drill demonstration on the lawn by members of the 9th Pennsylvania Reserves. At 12:30, local musician Ron Mesing will be on stage at the Music Hall playing songs of the Civil War era. Please note that face masks and social distancing are required. For those unable to join us in person, we will also stream the event (lecture portion only) on Zoom and on Facebook… Facebook: www.facebook.com/CarnegieCarnegie No account required. Zoom: https://us02web.zoom.us/j/88363560976 Meeting ID: 883 6356 0976 As West Virginia celebrated statehood in the summer of 1863, Governor Francis Pierpont faced a daunting task. Much of his newly-created state lay outside his bounds of control, either occupied by Confederate forces, governed by Confederate authorities, or infested with Confederate guerillas. In particular, many “border counties” in southern and southeastern West Virginia lacked any state or Federal presence at all. In an effort to both expand West Virginia’s authority and enhance counter-insurgency measures, Governor Pierpont ultimately authorized the creation of forty-four companies of West Virginia State Guard in the latter years of the Civil War. In this talk, Zac Cowsert focuses on the wartime experiences and exploits of one such State Guard company: Captain Turner’s Raleigh County Independent Scouts. The talk illuminates the myriad ways in which the Raleigh Scouts and other State Guard outfits both challenged Confederate guerrillas and engaged in state-building on behalf of West Virginia. Currently a doctoral candidate in History at West Virginia University, Zac grew up in Oklahoma and Arkansas and attended school at Centenary College of Louisiana in Shreveport. Reflecting his roots, Zac’s Civil War interests reside in the Trans-Mississippi, and his dissertation explores the military campaigns, guerrilla warfare, refugee crises, and trial politics of Civil War Indian Territory (modern Oklahoma). His research has been published in the Chronicles of Oklahoma, North Louisiana History, and Hallowed Ground (magazine of the American Battlefield Trust). He teaches classes in U.S. History and Modern Military History at WVU. Beyond academia, Zac’s knowledge of the war was bolstered by four summers spent interpreting Civil War battlefields in Virginia for the National Park Service at Fredericksburg & Spotsylvania National Military Park. He is also the co-editor of Civil Discourse, a popular blog of the long Civil War era. He has spoken to several Civil War roundtables throughout the Mid-Atlantic region. 2nd Saturday Lectures made possible by the Massey Charitable Trust. Free and open to the public. No reservations required.