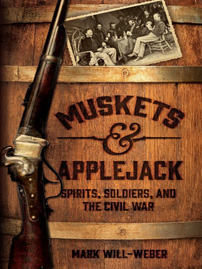 Historian Mark Will-Weber has produced a fascinating, poignant and oft times hilarious read about one of the rarely-mentioned and little researched factors of the Civil War: Booze. This lecture highlights what Dan Sickles once called the “whiskey war.” While alcohol didn’t cause the war, it certainly had an impact on the conflict from the halls of Congress to the country’s most hallowed battlefields. From the first intoxicated shots at Fort Sumter to the final toasts at Appomattox, the author totals up who drank what and when — and how famous campaigns may have happened somewhat “under the influence.”

Muskets and Applejack paints a full, complex picture of the surprisingly large role alcohol played in the Civil War: how it helped heal physical and emotional wounds, form friendships, and cause strife. Interspersed between stories from the battlefield are authentic recipes of soldiers’ favorite drinks-from both sides of the Mason-Dixon Line.

Mark is the great-grandson of the Civil War Col. John Kincaid Robison, who led the 16th Pennsylvania Cavalry during the end-game campaign leading up to Lee’s surrender at Appomattox. (Seated in picture at left center with mustache.)

Light refreshments served. Registration not required. Free and open to the public.