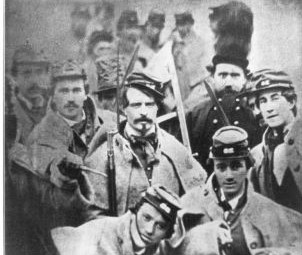 Antebellum militias comprise an important, yet overlooked part of the development of Civil War armies, both North and South. First Bull Run was officered, provisioned, and fought mainly by militia volunteers. Other than army commanders, the junior officer corps was made up almost entirely of amateurs commanding other amateurs. These volunteers are given short shrift.

Nevertheless, a deeper look will provide information about the men and the structures that eventually became the backbone of the Union and Confederate armies.

Meg Thompson Groeling, a contributing historian at Emerging Civil War, explores subjects beyond the battlefield, such as personalities, politics, and practices that affected the men who did the fighting. Meg’s undergraduate degree in Liberal Studies with a minor in American History was from California State University, Long Beach, and she received her Master’s degree in History, with a Civil War emphasis, in January 2016. She writes regular book reviews for ECW, Civil War News, and LSU’s online Civil War Book Review. Her first book for the Emerging Civil War Series is Aftermath of Battle: The Burial of the Civil War Dead. Her next book, First Fallen: The Life of Colonel Elmer Ellsworth, the North’s First Civil War Hero, will be published by Savas Beatie later this year.